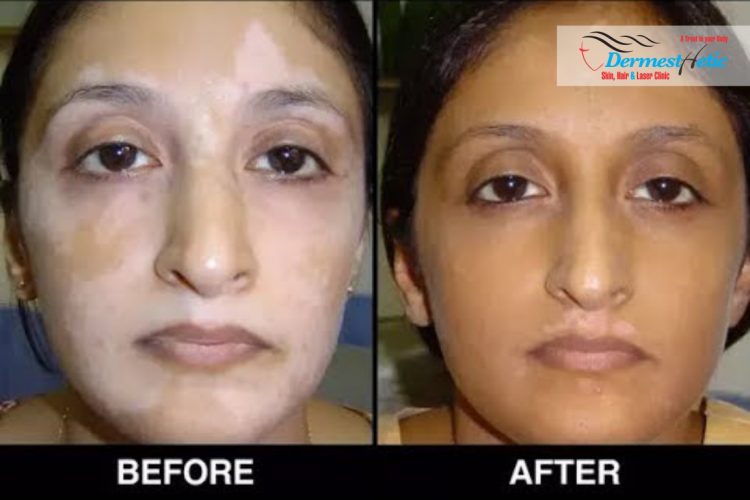 Vitiligo is a long-term condition where pale white patches develop on the skin. It’s caused by the lack of melanin, a pigment in the skin. Vitiligo is a condition in which white patches develop on the skin. Any location on the body can be affected, and most people with vitiligo have white patches on many areas. The only sign of vitiligo is the presence of pale patchy areas of depigmented skin which tend to occur on the extremities. Some people may experience itching before a new patch occurs. The patches are initially small, but often grow and change shape. When skin lesions occur, they are most prominent on the face, hands and wrists. The loss of skin pigmentation is particularly noticeable around body orifices, such as the mouth, eyes, nostrils, genitalia and umbilicus. Some lesions have increased skin pigment around the edges. Those affected by vitiligo who are stigmatized for their condition may experience depression and similar mood disorders.

Vitiligo is a long-term skin condition characterized by patches of the skin losing their pigment. The patches of skin affected become white and usually have sharp margins. The hair from the skin may also become white. The inside of the mouth and nose may also be involved. Typically, both sides of the body are affected. Often the patches begin on areas of skin that are exposed to the sun. We at DERMESTHETIC Silakot & Lahore, Pakistan have experienced dermatologists and cosmetologists diagnosing and curing these diseases.

Variations in genes that are part of the immune system or part of melanocytes have both been associated with vitiligo. It is also thought to be caused by the immune system attacking and destroying the melanocytes of the skin. A genomewide association study found approximately 36 independent susceptibility loci for generalized vitiligo. If you have vitiligo and want to treat it, you should discuss treatment options with a dermatologist. There are many treatment options. The goal of most treatments is to restore lost skin color. Here are some key facts about treatment options to help you start a conversation with a dermatologist. The type of treatment that is best for you will depend on your preference, overall health, age, and where the vitiligo appears on your body. Some people choose not to treat vitiligo. It is not possible to predict how a patient will respond to treatment. It is important to keep in mind that no one treatment works for everyone. Results can vary from one part of the body to another. Combining two or more treatments often gives the best results. Before starting treatment, a dermatologist should be consulted. We at DERMESTHETIC have such expertise and knowledge.

These markedly white spots are not caused by drinking milk with fish. Sour food or Vitamin-C does not cause leukoderma. These are the common myths spread by non-qualified medical practitioners. What causes this color loss is still a mystery. We do know that vitiligo is not contagious. It is not life-threatening. Vitiligo may result in psychological stress and those affected may be stigmatized. Although multiple hypotheses have been suggested as potential triggers that cause vitiligo, studies strongly imply that changes in the immune system are responsible for the condition. Vitiligo has been proposed to be a multifactorial disease with genetic susceptibility and environmental factors both thought to play a role. The TYR gene encodes the protein tyrosinase, which is not a component of the immune system, but is an enzyme of the melanocyte that catalyzes melanin biosynthesis, and a major autoantigen in generalized vitiligo. Some scientists’ states that some believe that sunburns can cause or exacerbate the condition, but that this idea is not well-supported by good evidence. Segmental vitiligo (the less common type) is thought to be caused by chemicals released from the nerve endings in your skin. These chemicals are poisonous to the melanocyte skin cells.

We at DERMESTHETIC at Silakot & Lahore, Pakistan have highly qualified Dermatologists/Cosmetologists who are expert in vitiligo treatments and procedures. And don’t forget, waiting for vitiligo to clear on its own can be frustrating. Without treatment, vitiligo can cause low self-esteem, depression and anxiety. To avoid these possible outcomes, dermatologists recommend that people treat vitiligo at an earliest stage as Treatment may prevent new breakouts.

We at DERMESTHETIC at Sialkot, Lahore, Pakistan have experienced dermatologists and cosmetologists treating the vitiligo along with counselling on psychological issue which may crop up due to vitiligo and properly advise the patients regarding the treatment. There are two kinds of vitiligo (i) segmental vitiligo (SV) and (ii) non-segmental vitiligo (NSV).

In non-segmental vitiligo (NSV), there is usually some form of symmetry in the location of the patches of depigmentation. New patches also appear over time and can be generalized over large portions of the body or localized to a particular area. Extreme cases of vitiligo, to the extent that little pigmented skin remains, are referred to as vitiligo universalis. NSV can come about at any age (unlike segmental vitiligo, which is far more prevalent in teenage years).

Classes of non-segmental vitiligo include the following:

Segmental vitiligo (SV) differs in appearance, cause, and frequency of associated illnesses. Its treatment is different from that of NSV. It tends to affect areas of skin that are associated with dorsal roots from the spinal cord and is most often unilateral. It is much more stable/static in course and its association with autoimmune diseases appears to be weaker than that of generalized vitiligo. SV does not improve with topical therapies or UV light, however surgical treatments such as cellular grafting can be effective.

We at DERMESTHETIC at Silakot & Lahore, Pakistan have experienced dermatologists and cosmetologists treating the vitiligo and properly advise the patient regarding the treatment after making diagnosis. Your doctor can usually make a diagnosis of vitiligo by looking at your skin during a physical exam. There’s no known way to prevent or cure the condition. But you can improve the appearance of affected skin with cosmetics and corticosteroid creams. Your doctor can also try re-pigmenting the white skin using UV light therapy or lightening the skin in unaffected areas, or a skin graft.

There is no cure for vitiligo but several treatment options are available. The best evidence is for applied steroids and the combination of ultraviolet light in combination with creams. Due to the higher risks of skin cancer, the United Kingdom’s National Health Service suggests phototherapy be used only if primary treatments are ineffective. Lesions located on the hands, feet, and joints are the most difficult to repigment; those on the face are easiest to return to the natural skin color as the skin is thinner in nature

The most common types of therapies/medicines that doctors use to treat vitiligo include:

These medicines have possible side effects, so patients must be carefully monitored. A possible serious side effect of using of a topical corticosteroid for a year or longer is skin atrophy. This means the skin becomes paper thin, very dry, and fragile. You may be at increased risk of developing non-segmental vitiligo if other members of your family have it, there’s a family history of other autoimmune conditions – for example, if one of your parents has pernicious anaemia (an autoimmune condition that affects the stomach). The change in appearance caused by vitiligo can affect a person’s emotional and psychological well-being and may create difficulty in becoming or remaining employed. People can experience emotional stress, particularly if vitiligo develops on visible areas of the body, such as the face, hands, or arms. Participating in a vitiligo support group may improve social coping skills and emotional resilience.